As the world grapples with the ongoing and increasingly pressing need for energy diversification, Saudi Arabia has the natural potential to capitalize on enormous opportunities in the renewable energy sector.

Although global progress so far has been relatively modest, despite the falling production costs of renewable energy, Saudi Arabia is blessed with enviable conditions that could enable it to secure a pivotal status in future energy markets.

Omar Al-Madhi, Abdul Latif Jameel Energy CEO, Saudi Arabia, said: “As a nation we are well-endowed with vast stretches of flat land, which is ideal for incorporating solar plants.  We are one of the highest solar radiation locations on Earth and we have, to a certain degree, the other necessary elements as far as [power distribution] network connectivity is concerned.”

Saudi Arabia’s solar power potential is enormous.  It lies in the ‘Global Sunbelt’, a geographic region situated between 35°N and 35°S and generally characterized by high solar irradiation[2].  Its solar irradiances are among the highest in the world[3], with annual average daily global horizontal irradiance (GHI) measured at 5700 Wh/m2 to 6700 Wh/m2 [4].

Indeed, more than 59 percent of the Gulf Cooperation Council’s (GCC) surface area “has significant potential for solar photovoltaic (PV) deployment.  Developing just 1 percent of this area can potentially result in 470GW of solar PV capacity,”[5] according to the International Renewable Energy Agency (IRENA). 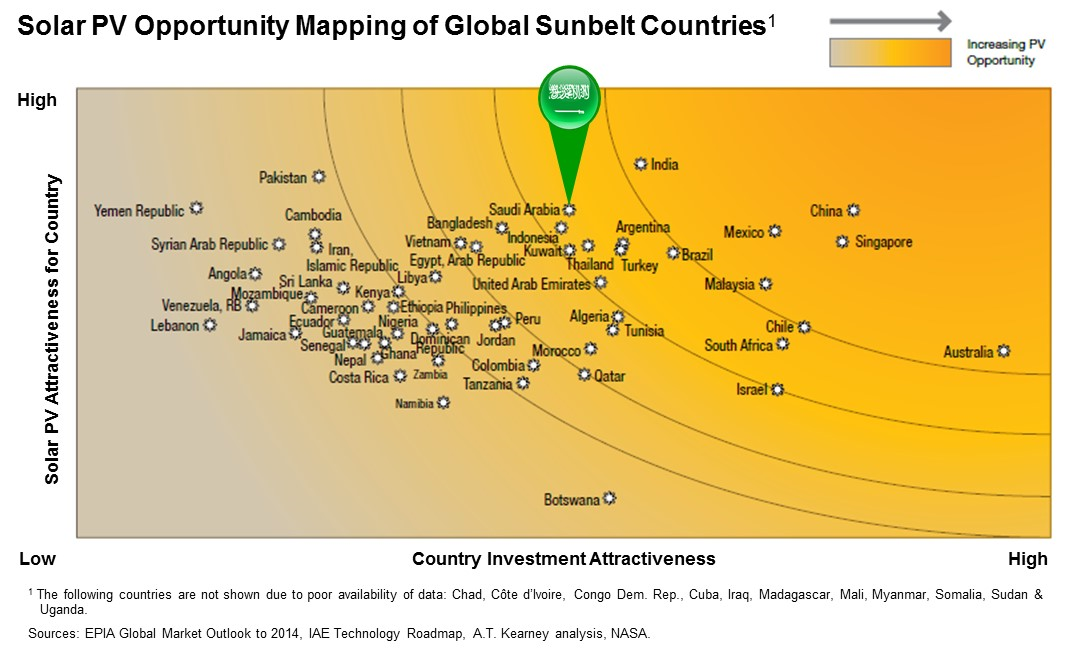 Saudi Arabia is equally blessed in terms of its wind energy resources, too.  Three regions of the country are particularly suitable for generating wind energy.  Average wind speeds in the northeast, central and mountainous regions to the west are all 33 percent above the levels needed for wind energy to become economically viable.

“There’s already been a pilot project by Saudi Aramco where they have installed a wind generation turbine,” says Mr. Al-Madhi.  “That will hopefully create a good example for the rest of the country to follow.”

Indeed, economic and environmental factors that benefit renewable energies are aligning across the GCC.  According to IRENA[6], “the abundance of solar resource potential and the falling cost of associated technologies, mainly photovoltaic (PV) modules, are major factors influencing the attractiveness of solar energy in the region.  Solar PV modules, for instance, cost three quarters less today than in 2009 and will continue to decrease.”

IRENA has also highlighted encouraging developments in the provision of wind energy.  “Globally, onshore wind costs have been declining, making it one of the most competitive sources of electricity available in wind-rich countries.”

However, while new technologies such as wind and solar power generation have grown, they have done so from a small base and there is still much work to do globally.  The latest Global Tracking Framework report produced by the World Bank and the International Energy Agency[7], for example, says more significant steps are needed if global renewable energy targets are to be reached.  It argues that large, energy-intensive industries – such as heating and transport sectors – must now be encouraged to develop greater use of renewable energies.

Saudi Arabia’s government is backing the process of energy diversification, with its comprehensive Vision 2030[8] national development strategy emphasizing the country’s commitment to a cleaner future.  It is targeting 3.45GW of renewable energy by 2020, 9.5GW by 2023, and 54GW (41GW solar, 9GW wind, 3GW waste-to-energy and 1GW geothermal) by 2040[9].  Vision 2030 states:

“Even though we have an impressive natural potential for solar and wind power, and our local energy consumption will increase three-fold by 2030, we still lack a competitive renewable energy sector at present.To build up the sector, we have set ourselves an initial target of generating 9.5 gigawatts of renewable energy.  We will also seek to localize a significant portion of the renewable energy value chain in the Saudi economy, including research and development, and manufacturing . . .”

The government is also taking firm steps to ensure that the positive words of Vision 2030 are carried through into positive actions.  In Vision 2030, the government pledges to “review the legal and regulatory framework” around the private sector investing in renewables; “localize the industry” by encouraging public-private partnerships; and ensure the competitiveness of renewable energy through “the gradual liberalization of the fuels market”.

It has also set up a Renewable Energy Project Development Office (REPDO) within the Ministry of Energy, Industry and Mineral Resources, which aims to ensure renewable energy growth matches the ambitions laid out in Vision 2030.

It is aided in this role by the National Renewable Energy Program (NREP) and the National Transformation Program (NTP), which are both working to ensure the country meets the target of 9.5GW of renewable energy by 2023. 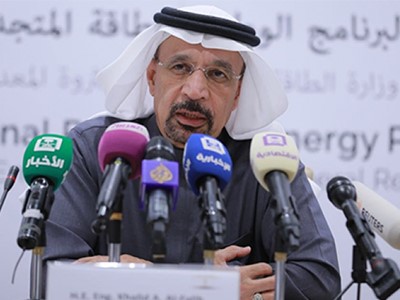 In February 2017, Saudi Arabia launched its first request for qualifications (RFQs) for round one of the NREP – which is run by REPDO.  Khalid A. Al-Falih Minister of Energy, Industry and Mineral Resources said: “It is our goal to make the National Renewable Energy Program among the most attractive, competitive and well executed government renewable energy investment programs in the world, and we have all the necessary infrastructure in place to ensure that is the case.”[10]

The NTP, meanwhile, is hailed as “a key part of a blueprint to prepare the kingdom for the post-oil era”.  Its objectives include ensuring 4 percent of Saudi Arabia’s total energy use comes from renewables by 2020, and that almost 7,800 jobs are supplied by the atomic and renewable energy sectors in the same timeframe[11].

Those targets look eminently achievable.  In April 2017, the government announced it will offer as much as 1 GW of contracts to buy renewable electricity by the end of 2017[12].  It will auction power-purchase agreements covering 620 megawatts of photovoltaic installations and 400 megawatts for wind farms in its second round of tenders for the technologies, according to Turki al-Shehri, head of renewable energy project development at the Ministry of Energy, Industry and Mineral Resources.

Working to Advance Saudi Arabia and its People

Abdul Latif Jameel continues to work tirelessly to support the Saudi government in achieving its vision for renewable energy in the country.  It formed Abdul Latif Jameel Energy in 2012, and since then has been harnessing global best practice in a bid to develop increasingly efficient and cost-effective renewable energy solutions.  Its efforts are designed to ensure the country meets its specific renewable energy targets for 2020, 2023 and 2040, and that Saudi Arabia’s citizens enjoy ever more prosperous and enhanced standards of living. 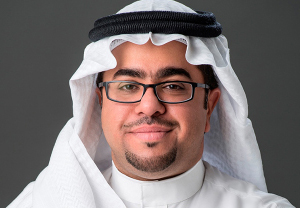 Mr. Al-Madhi said: “As an organization, we are in an advantageous position.  We have the international know-how needed for solar and wind development because we’ve developed projects outside the boundaries of Saudi Arabia, extending as far as Uruguay in the west and Australia in the east.

That allows us to benchmark against the best practices applied in different countries.”

“But above all, we are a Saudi-centric organization; this is where we began and this is where we have built up a strong brand, based on excellent customer service and the ability to deliver operationally.”

“The combination of our international experience, technical know-how and in-depth knowledge of Saudi Arabia means we can bring a range of benefits to the country.  These include, creating new jobs, transferring know-how to the local population and localizing services such as Operation and Maintenance and Asset Management used for our projects.”

Abdul Latif Jameel Energy is doing everything it can to help deliver a cleaner future for its home country.  Mr. Al-Madhi was among the attendees at the inaugural Saudi Arabia Renewable Energy Investment Forum (SAREIF) in April 2017.  The event, which was staged in Riyadh, Saudi Arabia, saw industry leaders gather to explore the opportunities afforded by the country’s vast renewable energy potential.

Mr. Al-Madhi said: “I firmly believe that Saudi Arabia can be a reliable, global and very significant energy supplier to the world in a renewable energy era, just like it has been in the hydrocarbon era.”

“We have all the fundamental requirements for achieving a leadership role, whether that’s location, an abundance of land, or irradiation numbers.  The renewable energy sector could be a platform for us stretch beyond meeting our local requirements and continue to supply energy to the whole world.”

Shuqaiq 3:
rising to the challenge

Mohammed Al Murci, Chief Operating Officer of Shuqaiq 3 Company for Water (S3CW), the SVP set up to manage the development of the project, discusses progress to date and outlines some of the challenge ...

Hydrogen energy comes from the simplest and most abundant element in the universe – hydrogen.  All that is needed for this energy revolution is some ingenuity, a little determination, and a fusion ...