Transforming Saudi Arabia’s energy mix over the next decade is one of the key priorities outlined in Vision 2030, the government’s development strategy for the nation.

While, in the short-term at least, traditional fossil fuels will remain the country’s dominant energy source, there is an increasing interest in – and momentum behind – the potential of renewable energy to help power future economic growth.

Over the next 20 years, Saudi Arabia’s plans are nothing if not ambitious: 3.45GW of renewable energy by 2020[1], 9.5GW by 2023[2], and 54GW (41GW solar, 9GW wind, 3GW waste-to-energy and 1GW geothermal) by 2040[3].  If these targets are achieved, the country will not only have transformed its energy industry, it will also have succeeded in establishing a hitherto elusive economic stability, freed, at least partially, from the volatilities of global fluctuations in oil prices that have impacted the economy on the country and the Gulf region in recent years.

What factors are driving the investment in renewables?

There are several factors behind Saudi Arabia’s determination to grow its renewable energy base.

As well as its huge solar energy potential, Saudi Arabia is also blessed with enviable resources for both wind and geothermal energy production.  Three regions – in the northeast, the center, and near the mountains in the west – have high enough average wind speeds to make wind energy economically viable, and there are at least 10 hot springs, of which Al Khouba is the most prominent, ideally suited for geothermal power generation.

The energy requirements of the scores of “high energy-intensive industrialization programs” that are re-shaping the country’s economy are also contributing to the unprecedented need for energy, according to Moody’s Investors Service.[9]

Around the world, renewable energy is already a major source of job creation.  In the United States, for example, the number of people employed in the solar industry rose by 25% in 2016 and the industry’s workforce has increased 17-fold since 2010, according to figures supported by the United States Department of Energy[11].

With the NTP aiming for 4% of Saudi Arabia’s energy usage being supplied by renewables by 2020[12], the pace of expansion could deliver a range of jobs to the country’s growing population.  Indeed, by 2030 the GCC looks set to hold 207,000 jobs direct from renewable energy – of which almost 77,000 will be in Saudi Arabia[13].

Around the world, the switch to renewable energy is being driven above all by one issue that is impossible to ignore: it makes ever-increasing economic sense.

Over the past five years, global oil prices have halved, from an average of US$ 110 per barrel to around US$ 55-60 per barrel over the past few months.  For countries that rely so heavily on oil for their income – as do many across the MENA region – this has led to enormous pressures on budgets and has focused minds on developing alternative revenue streams to fill the gap.

At the same time, renewable energy is becoming ever cheaper to deliver.  Several recent auctions have seen world-record solar prices, with the MENA region leading the charge.  According to IRENA, the region has “some of the lowest levelized costs for electricity from solar PV”[14].

Recent landmarks include the 300MW Sakaka project in Saudi Arabia’s northern Al-Jouf region, part of the National Renewable Energy Program, where Masdar and EDF submitted the lowest ever bid of 1.79 US cents per kilowatt hour (kWh) in October 2017.  According to REPDO, this was 24% cheaper than the second lowest bid, from Acwa Power.

The project is seen as “an important step on the way to diversifying Saudi Arabia’s domestic energy mix and building a cutting edge domestic renewable energy sector,” Energy Minister Khalid al-Falih said at the ceremony to open bidding for the project.

The previous two lowest global solar power bids also related to projects in the MENA region, albeit in neighboring UAE.  In March 2017, the 1.17 GW Sweihan project in Abu Dhabi saw a winning bid of 2.42 US cents per kWh.  The winning bidders were Japan’s Marubeni and Chinese energy company Jinko Solar, which will each take a 20% stake in the plant, with ADWEA, the Abu Dhabi Water Authority, retaining the remaining 60%.  The new plant, 100 km south west of Abu Dhabi, is due to come on stream by April 2019, producing enough electricity to power about 200,000 homes.

This Sweihan bid was, on the face of it, some 50 cents per kWh cheaper than the previous record low bid of 2.99 US cents per kWh in June 2016, for the 800 MW phase 3 of the Mohammed bin Rashid Al Maktoum solar park in Dubai for Dubai Electricity & Water Authority (DEWA); however, we should clarify that the underlying price is essentially the same as the DEWA project, on an ‘apples-to-apples’ comparison as energy produced in the summer months is paid at a premium, giving a base tariff announced of US$ 0.042.  The real underlying price is US$ 0.0294.

The winning bidder here was a consortium led by Masdar and Fotowatio Renewable Ventures (FRV), part of Abdul Latif Jameel Energy.[15]  The Mohammed bin Rashid Al Maktoum Park will be the largest single-site solar project in the world when complete by 2030, with a planned capacity of 5,000MW – enough to power 800,000 homes – and a total investment of AED 50 billion (US$ 13.6 bn).

“Energy is an integral part of the social and economic development of all countries, and the transformation towards clean energy has positive environmental, social, and economic effects, making conventional energy less competitive and attractive for further investments.  Clean energy is a great opportunity for the future as demand keeps rising around the world.  Oil prices and improved technology have helped increase the share of renewable energy in the energy mix.  This makes technology a key factor in the transformation towards clean energy,” said HE Saeed Mohammed Al Tayer, MD and CEO of Dubai Electricity and Water Authority (DEWA), announcing the winning bidders.

The costs associated with development are also falling.  In the United States, the costs of constructing large-scale photovoltaic projects reduced by 57% between 2011 and 2016[16].  Globally, between 2009 and the end of 2015, the price of solar PV modules fell by roughly 80%[17].  As a result, the levelized cost of electricity (LCOE) of utility-scale solar plants, which indicates the average energy unit price a plant must receive to break even over its lifetime, fell by 50%.

Throughout its history, Abdul Latif Jameel has consistently strived to deliver better living standards for citizens across Saudi Arabia and the wider MENAT region.  With the advance of renewable energy and the prospect of better jobs, cleaner air, and reduced energy bills, this long-held ambition could be significantly realized. 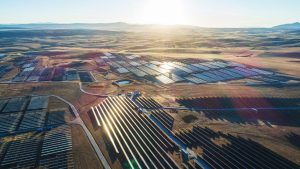 FRV is also involved in active projects in Mexico, Australia, and Uruguay, and with an historic track record in Europe, North and South America as well, is already the  largest GCC-based solar PV developer – more recently FRV have stepped into wind power with over 1GW of potential under consideration in the project pipeline across 20 markets.  With these developments, FRV can bring world-leading knowledge to Saudi Arabia’s renewable energy infrastructure and upskill the country’s workforce with best-practice methods and insight.

Omar Al-Madhi, CEO of Abdul Latif Jameel Energy Saudi Arabia, said: “Renewable energy is a chance to create new jobs, new skills and new opportunities for the local population.  By localizing technology and transferring knowledge, we can provide a strong foundation on which the Saudi renewables industry can thrive.”

He added: “Shifting to renewables will help us, as a country, to secure the role we’ve always played in the global energy market: one where we have the additional spare capacity to help balance markets. It will also help us achieve more environmentally-friendly economic development goals, and ensure we become a better contributor to the world’s green movement.

“With the jobs, skills and opportunities available through renewable energy, there is a significant opportunity for Abdul Latif Jameel Energy to serve communities across the country in a positive and life-enhancing manner. It is an opportunity we are determined to grasp.”

To learn more about how Abdul Latif Jameel Energy is working to shape a better future for all in Saudi Arabia, visit www.alj.com/energy.

[4] What an oil-rich region can teach the world about renewable energy, World Economic Forum, 8 November 2016

[7] What an oil-rich region can teach the world about renewable energy, World Economic Forum, 8 November 2016

[8] What an oil-rich region can teach the world about renewable energy, World Economic Forum, 8 November 2016

[15] FRV have since withdrawn from the consortium and been replaced by EDF.