As Saudi Arabia and the Middle East accelerate into the 21st century, economies across the region are undergoing transformational change.  Foreign investment is being encouraged, a strategic diversification away from reliance on traditional industries is helping to reshape the business landscape, and forward-looking government and commercial organizations are sensing the potential possibilities open to them.

These changes create new pressures for the region’s businesses, as they seek to increase performance, strengthen efficiency, develop their businesses, and provide better products and services to their customers and clients.

Successfully achieving these objectives requires more than just hard work and aspiration.  It needs businesses to critically assess their current ways of working, their operational approach, and their culture, to identify where the bold changes required can be made.

One of the methodologies most commonly used to support and guide businesses on this journey is Lean Management, or ‘kaizen’, pioneered by Japanese corporations to boost efficiency and performance, eliminate waste and optimize the use of resources.

What is Lean Management?

For more than 100 years, the concept of Lean Management has been one of the world’s most prominent business methodologies.  It takes a detailed, step-by-step approach to ensuring a business uses all its resources in the most efficient manner.

Lean businesses consider every action and activity, no matter how small, against one simple question: can it be improved to add more value to the product or customer? Any activities that fail that test are deemed waste – and reduced or removed from the organization’s processes.

By eliminating waste and optimizing processes, lean businesses are better able to withstand unexpected turbulence in either the market in which they operate, or the wider economy.  “Lean management is the application of common sense to achieve efficiency and effectiveness,” says Patrick Wiebusch, co-founder of Lean Management consultancy Four Principles.

Henry Ford is credited with creating the first rudimentary lean manufacturing process, when he introduced a moving assembly line to his factories in 1913.  However, it was the work of Kiichiro Toyoda, Taiichi Ohno and others at Toyota in the 1930s that refined and developed Ford’s original idea to create a true Lean Management and manufacturing system.

Using Ford’s methods as inspiration, they created the Toyota Production System – and sparked a revolution that, over the decades to come, transformed businesses in both Japan and the United States.

Kaizen, as the Japanese called this process of continuous improvement, originated in manufacturing processes.  However, it can be equally applied to service businesses.  Organizations adopting Lean Management assess every action and activity for potential improvements, no matter how small.  Those gains may be minor in isolation but, taken together, add up to significant improvements that drive positive change.

What can Lean Management achieve?

The effect of Lean Management can be both dramatic and profitable.  Companies around the world have experienced its advantages and re-shaped their entire internal systems along lean principles.

Perhaps one of the most widely recognized achievements in Lean Management is the rescue and rehabilitation of renowned sports car manufacturer, Porsche in the mid-1990s.  When Wendelin Wiedeking was appointed chief executive in 1992, aged just 41, the company was making significant losses and faced a bleak future.  His objective was simple – ensuring Porsche’s survival – although achieving it was anything but. 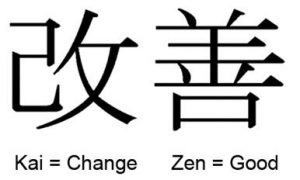 Wiedeking believed that only lean manufacturing could save the company from closure.  He approached two of the world’s leading Lean Management consultants, Yoshiki Iwata and Chihiro Nakao, both of whom had worked under Taiichi Ohno at Toyota.  After declining his first two approaches, Iwata and Nakao finally agreed to help Wiedeking transform the struggling German car maker.

Wiedeking’s faith and persistence proved justified.  Iwata and Nakao made huge changes to processes, procedures and policies across the Porsche factory.  One of the most dramatic was to reduce the quantity of parts on site from enough for 28 days’ production, to enough for just 30 minutes’ production.

This change alone lowered overheads on everything from leasing facilities to store parts and components, through to security, as well as increasing Porsche’s cash reserves and cutting lost time, as workers no longer needed to search through an overwhelming array of parts for the specific component they needed.

The headline accomplishments of this lean approach were even more eye-catching: after just one year, a Porsche Carrera could be produced in just two-thirds of its original time.

Even today, 25 years after Wiedeking introduced the Lean Management approach, and eight years after his departure, Porsche’s productivity continues to increase by an average of six per cent per annum – largely because of the now total commitment to lean operations.

From its Japanese roots, Lean Management has spread gradually across western Europe and the United States over the past three decades.  Now, forward-thinking businesses across the Middle East and North Africa are looking to Lean Management to help them drive the transformation necessary to continue to thrive into the 21st century.

Businesses are recognizing that, as economies develop and become more open, challenger brands are creating a dynamic, fast-moving environment in which established enterprises will have to seek every possible efficiency to compete.

The potential for Lean Management to help businesses confront these challenges, and to catalyze business and economic development across the Middle East, is reflected in the announcement of a new joint venture between Abdul Latif Jameel and Lean Management consultancy, Four Principles.

The new company offers advisory and implementation services that will improve efficiency within governments and companies throughout the region.  It will work across FMCG, construction, heavy industries, oil and gas, aviation, and several other sectors.

Seif Shieshakly, a co-founder and managing partner of Four Principles, believes some of the challenges facing companies in the Middle East are similar to those encountered by Toyota in the 1930s.  “They [Toyota] first got into this mindset because of the need to survive in a rapidly changing market,” says Shieshakly.  “They knew they had to change.  They didn’t want to, but they had to adopt a brand-new mindset and a whole new way of thinking.

“Now, with all the changes in the Middle East and North Africa, with reforms in the market and a push to reduce the dependency on oil, lots of companies are facing a similar situation – they have to change if they are to continue to succeed in the long term.”

Having worked with organizations all around the world on Lean Management, Shieshakly and Wiebusch have identified several common challenges for businesses implementing Lean Management for the first time.

Employees can often be resistant to the level of change that is common with Lean Management, often due to a fear of losing their status or authority within the organization’s hierarchy.

Wiebusch says: “The challenge with Lean Management is in the implementation, not the understanding.  Top management usually understand Lean Management, and operators on the shop floor also understand it very quickly.  The problem is in the middle management, who often try to keep information to themselves.  With lean operations, you create a fully transparent environment with KPIs and accountability that are measurable on a daily basis.  So the middle management has most to lose, and often try to torpedo the whole change initiative.  One bad apple can make the whole process stop, and that’s the challenging part.”

Shieshakly also points out that over-familiarity can lead to significant opportunities being missed.  He said: “The issue you find in many companies is that they have their own internal operational excellence monitoring but, over time, vigilance diminishes as people settle into new routines and processes.  They are so used to doing things in a certain way – even monitoring – that it’s hard to step back and see what other options are possible.”

He believes that Four Principles’ ability to spot potential improvements that have previously gone unnoticed, due to internal teams being too close to the existing system to be able to clearly identify its flaws, is a key factor in their ability to help businesses transform.

Abdul Latif Jameel first adopted the kaizen culture when it began importing Toyota vehicles from Japan to Saudi Arabia over 60 years ago. It has since experienced at first-hand how Lean Management can ensure a business is strong enough to adapt and evolve in changing environments.

The diversified Saudi-owned family business’s investment in Four Principles reflects this long-standing relationship with Japan, and follows the recent Saudi-Japan Vision 2030 agreement to have closer ties between the two countries.

Fady M. Jameel, Deputy President and Vice Chairman of Abdul Latif Jameel says: “Abdul Latif Jameel and Four Principles share a commitment to delivering high quality, innovative solutions for clients.  Across the private and public sector, organizations are looking to drive efficiency and improve effectiveness, and position themselves to make the most of the great opportunities in the region.  The new joint venture will meet that need, providing a strong offering in an in-demand market.”

The joint venture also follows Abdul Latif Jameel’s commitment to work with local and Japanese organizations to establish a kaizen company and training academy for the public and private sectors in Saudi Arabia.

Mohammed Abdul Latif Jameel, Chairman and Chief Executive Officer of Abdul Latif Jameel, said: “As the government of Saudi Arabia gets its economic diversification strategy underway as part of the Vision 2030 plan, the kaizen philosophy can support in streamlining performance across a wide range of fields in both the private and public sectors, while playing a key role in improving output.”

In line with these objectives, Four Principles aims to inspire economic growth across Saudi Arabia and the wider region over the coming years, on both a micro and macro level.

Shieshakly says: “Working with Abdul Latif Jameel, there is a real desire and passion to spread the lean way of thinking and, more importantly, its benefits and the actual result of implementation, to more companies in more sectors.  Lean Management has the proven potential to benefit businesses across the region a much bigger scale, benefiting more clients and more markets than we currently touch. We’re determined to help achieve this vision.”

To learn more about the origins of Lean Management, the principles behind its success, and what it could do for your organization, visit www.fourprinciples.com.