Driving towards a cleaner future? How hybrid and electric vehicles look set to transform the automotive industry.

Powered by falling battery costs and a growing momentum behind the push to a cleaner energy mix, hybrid, plug-in hybrid and full electric vehicles are fast becoming an everyday reality for populations around the world.  So what does the future of the automotive industry look like?  Do electric vehicles really have long-term consumer and regulator appeal and staying power?  Or will they suffer the same fate as some of the other alternative fuels, like LPG, LNG, bioethanol and hydrogen, touted as game changers in the past?

Toyota, a longstanding partner of Abdul Latif Jameel Motors for more than 60 years, has declared its ambition to have annual sales of one million zero emission vehicles by 2025.  It surpassed its own 2020 target in 2017.

General Motors and Volvo Cars have issued similar aspirations.  The Nissan Leaf has been the world’s most popular electric vehicle for some time.  Since 2010, it and its predecessor have sold more than 350,000 units worldwide.  It is now available in 51 markets, with one sold in Europe every 10 minutes throughout 2018[2].  Behind Nissan sit the all-electric newcomers including Tesla, NIO, Lynk & Co. Faraday Future, and most recently RIVIAN.  However, not all will make it – Fisker Automotive being the best-known example.  Founded in 2008, the US electric vehicle manufacturer was declared bankrupt in 2013.  Its assets were subsequently acquired by China’s Wanxiang Group, while Henrik Fisker, the company’s eponymous founder, set up a new electric vehicle producer – Fisker Inc., in 2016.

Governments around the world are also setting targets – and in some cases legislating – to ensure electric vehicles become the dominant vehicle choice of the next two decades.  The Norwegian government, for example, wants all new cars to be zero-emission by 2025[3].  In the UK, the government will ban the sale of internal combustion engine (ICE) passenger cars from 2040, leaving only hybrid and electric vehicles available to consumers.  And in Canada, the government aimed for 500,000 electric vehicles to be on the road in 2018.  Ultimately, that target proved too ambitious.  Yet it serves as a clear notice of the country’s intended direction of travel.

Something in the air is changing.  Indeed, the current accelerating pace of technological and regulatory innovation, government incentives, product launches, media hype and accelerating consumer adoption are such that some analysts are predicting 400 electric vehicle models on the market by 2025 and global sales of 25 million[4].

By 2040, Bloomberg New Energy Finance predicts that electric vehicles will represent 33% of the global car fleet and 55% of new car sales (compared to just 1% in 2016[5]), with almost 560 million on the road worldwide[6].  Other industry experts predict that hybrid and electric vehicles will account for half of the world’s new car sales by 2030[7]. 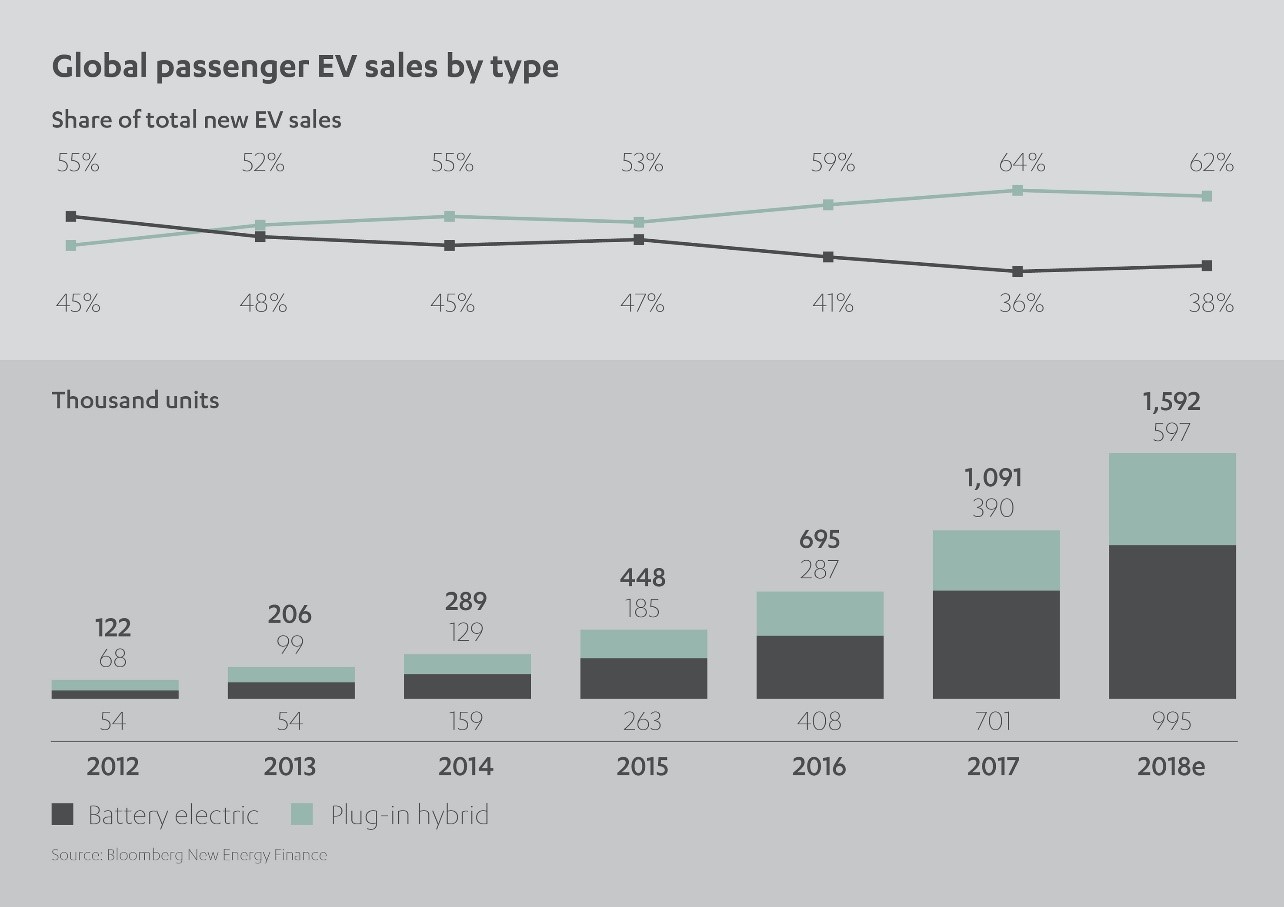 Of course, there is more to consider than simply the number of electric vehicles on the road.  Charging infrastructure, either slow or fast, remains a barrier in many countries, while the supply of some raw materials, like cobalt, could create some bumps in the road to cheaper batteries[8].  Yet serious growth is unquestionable.  By 2023, the global electric vehicle chargers market is set to reach US$ 1,786 billion (up from US$ 163 billion in 2016)[9]. 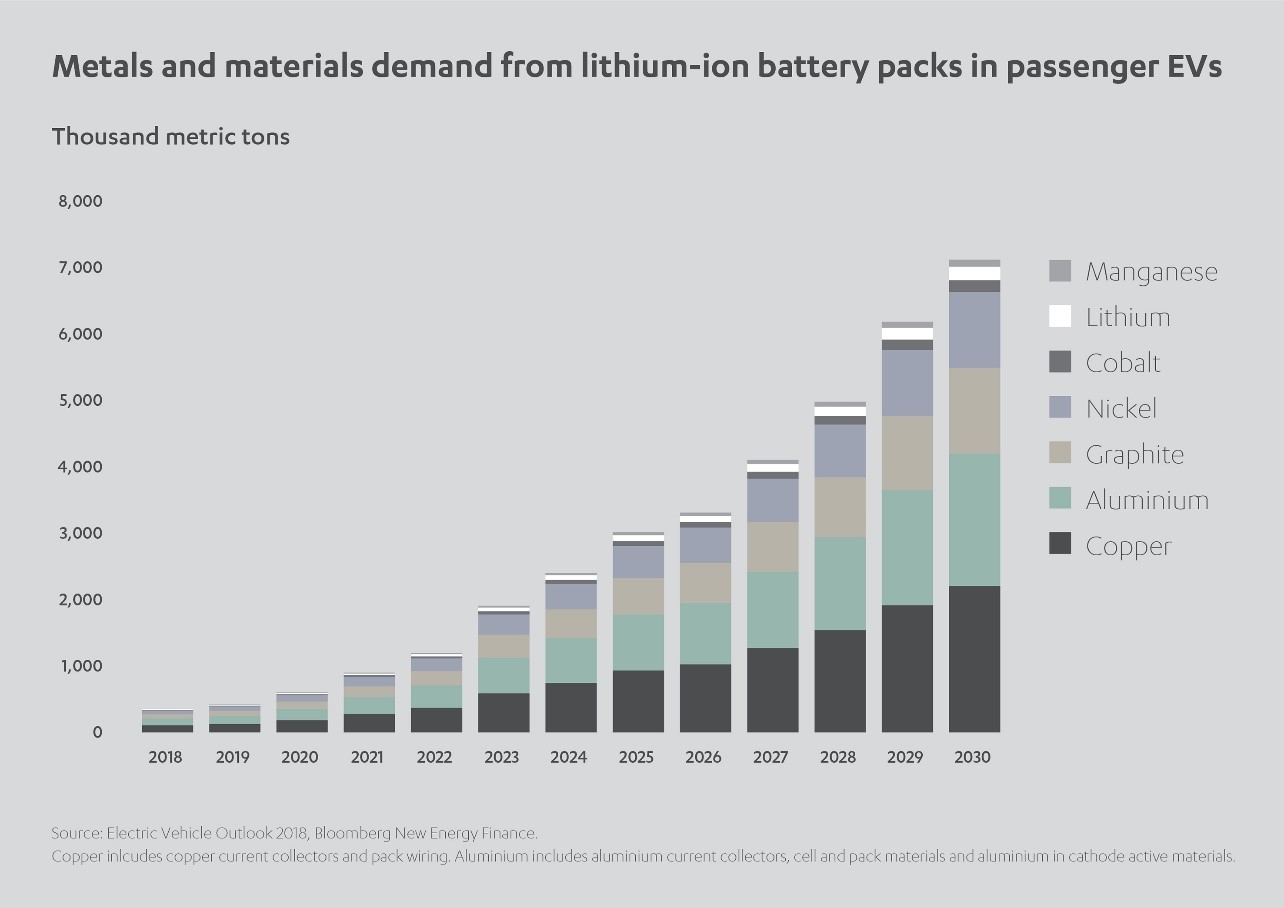 It is clear that hybrid and electric vehicle sales are growing exponentially around the world – and all expectations are that they will only increase in popularity as a new generation turns its back on traditional ICE vehicles.  But which countries are leading the switch? 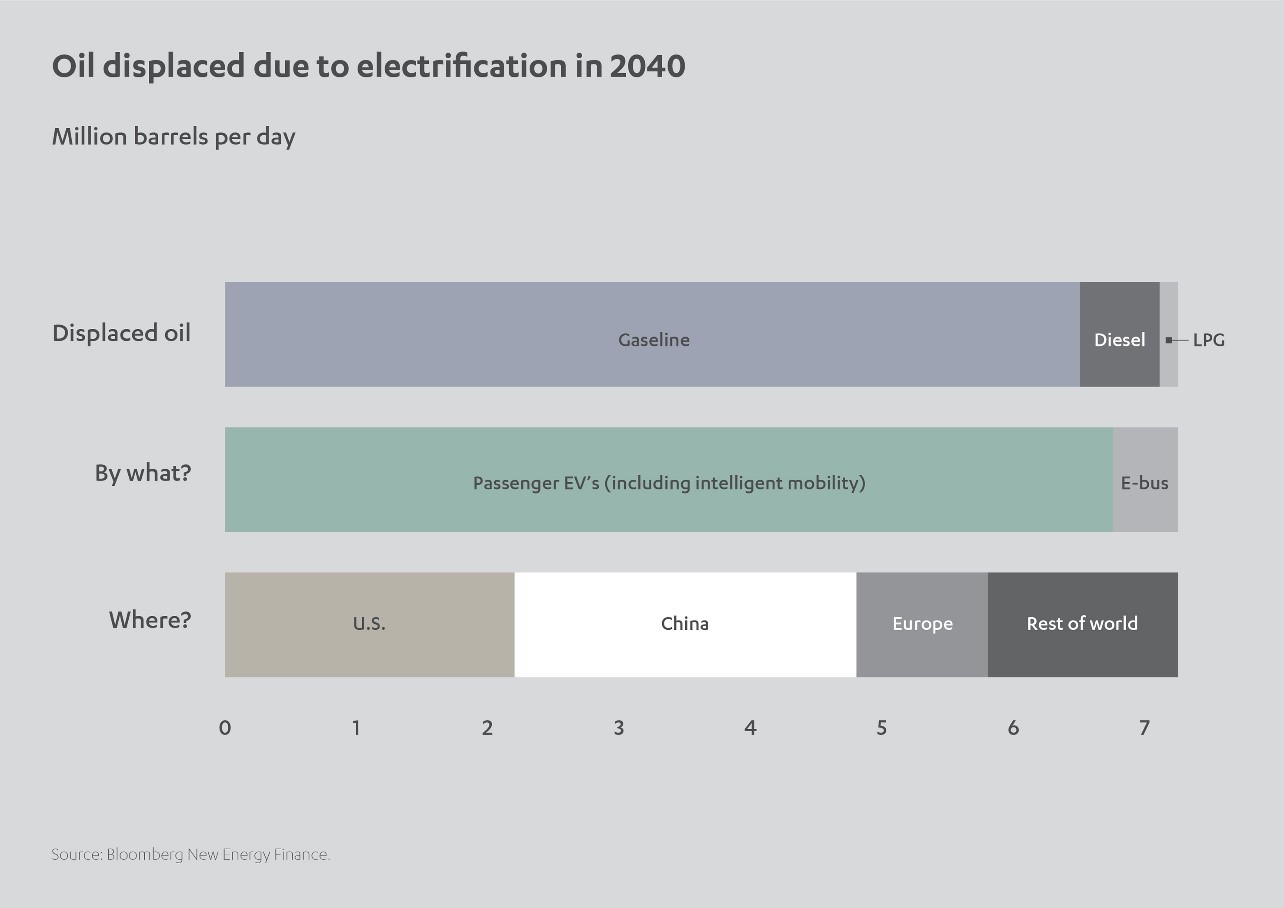 With battery prices falling by up to 20% per year, some observers expect the compound annual growth rate (CAGR) of China’s new electric vehicle (NEV) market to hit 46% by 2020[11].

There is also significant progress being made in the MENAT region, including Turkey, Morocco, the United Arab Emirates and Saudi Arabia.

In Turkey, the government offers a range of financial incentives and tax exemptions for hybrid and electric vehicles in a bid to promote the alternatives to ICE vehicles.  It is a move that appears to have had a significant impact: sales of hybrid cars rose 61.5% in the first six months of 2018, while half of all Toyota C-HR sales in 2017 came from the hybrid model.

Ali Haydar Bozkurt, CEO of Toyota Turkey Marketing and Sales (TTMS), said: “We mobilized all our retailers in Turkey to promote interest in hybrid cars, and the rise in hybrid sales reflects this trend.  At Toyota, we’ll work continuously to ensure our people are well informed on the environmental, economic and driving experience benefits of this technology.”

Turkey, like most countries, is stepping up its efforts to address many of the common issues around adopting a new generation of vehicles, particularly around infrastructure.

In Morocco, Toyota is set to launch its Corolla Hybrid vehicle in April 2019, with the current diesel Corollas regarded as being at the very end of their lifecycle.  Sales of hybrids increased by 200% in 2018 compared to 2017, albeit from a very low base.  However, the government is making decisions that look set to ensure a healthy future for both hybrid and electric vehicles.  It has introduced a preferential rate of just 2.5% custom duty on hybrids, exempted them from the country’s luxury tax, and looks set to also exempt them from road tax.  Toyota and Lexus, the only two brands in the country with a significant volume of hybrid and electric vehicle sales, look well placed to capitalize on these changes.  Toyota du Maroc saw 20% of its 2018 sales come from hybrid vehicles and exhibited at the Casablanca Motor Show to emphasize Toyota’s position as a leader in hybrid vehicles.

In terms of electric vehicles, the government has already started developing a network of charging stations to encourage buyers to choose electric, but coverage is still limited, with only around 40 charging stations currently available.

Meanwhile, in the United Arab Emirates, the government is aiming for 20% of its own fleet to be electric vehicles by 2020 – a decision likely to be backed by the International Energy Agency, which states that “public procurement programs for zero-emission vehicles, for instance to populate a municipal vehicle fleet, can provide a pivotal stimulus to market creation and expansion.[14]” Tesla has played an influential in boosting electric vehicle numbers. In just two years, the number of Tesla electric vehicles sold increased from 89 in 2016 to 4,221 in 2018.

Dubai alone aims to have 42,000 electric vehicles on its roads over the next decade[15].  Free parking and free power from 200 charging stations are two of the incentives offered to strengthen the take-up of EV[16], along with green bank loans, green insurance plans, and green registration of vehicles[17].  Initiatives such as the Electric Vehicle Road Trip[18], stretching from across the United Arab Emirates to as far as Muscat, Oman, continue to raise awareness of these vehicles in a region where ICE vehicles remain dominant, in part due to the low price of fuel compared to other regions in the world. 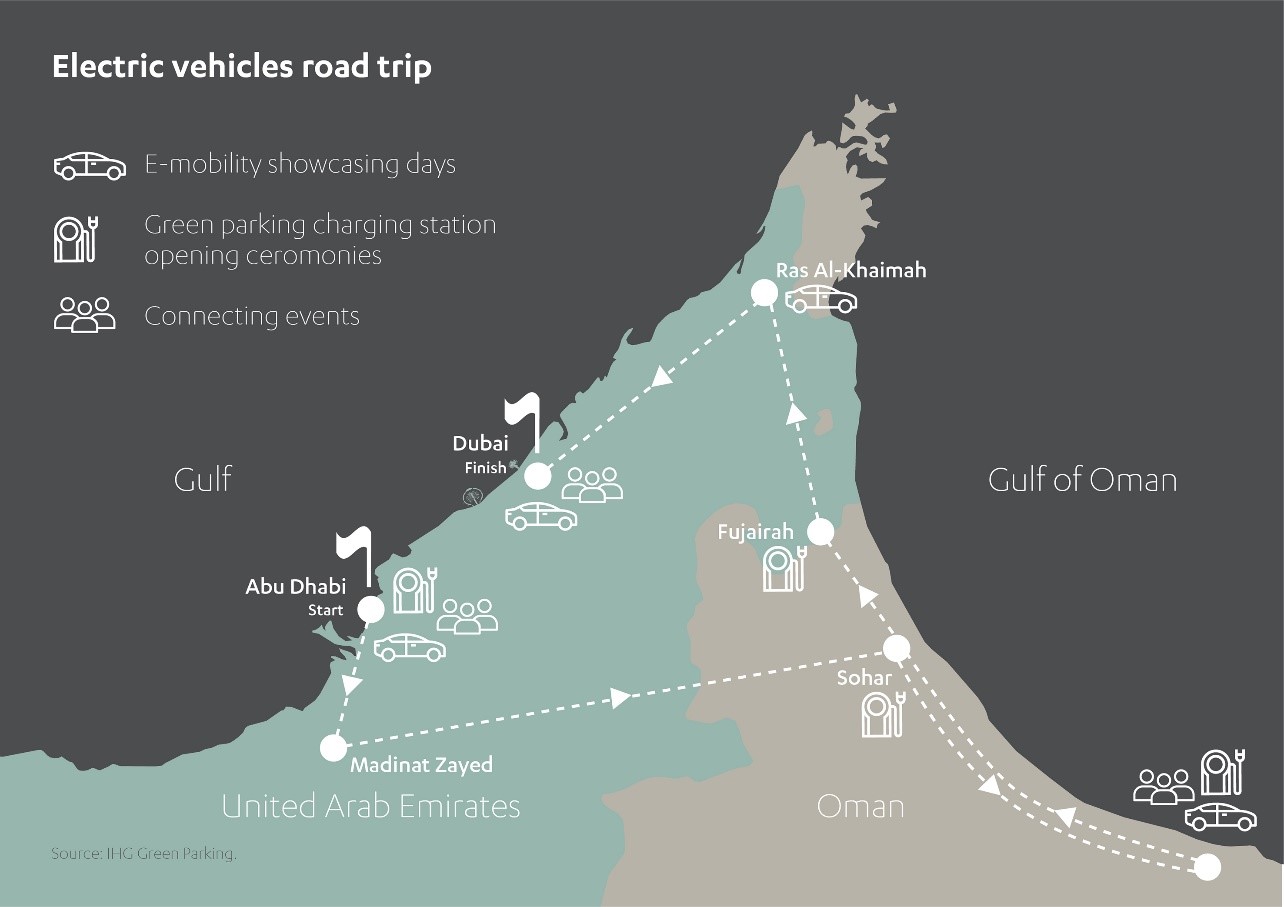 There is progress, too, in Saudi Arabia.  In 2016, the country was the first in the GCC to market the Toyota Prius, thanks to Abdul Latif Jameel’s six-decades-long relationship with the Japanese automotive giant[19].  Two years later, in May 2018, Abdul Latif Jameel Motors launched a new Toyota Camry Hybrid – a vehicle that significantly reduces visits to fueling stations thanks to batteries that can be charged either by the petrol engine or when braking[20].

In terms of wholly electric vehicles, to date, there have been few specific initiatives to promote electric vehicles, but the government is proceeding with implementing regulations.  The Saudi Arabian Standards Organization (SASO) plans to issue regulations for the use of electric vehicles.  Certain models of Tesla vehicles have been approved on a trial basis and feasibility studies are underway on the infrastructure requirements.

Fiscal incentives, including government subsidies, may help to encourage electric vehicle purchases in future.  The country’s first electric vehicle charging station was installed in Jeddah in October 2018, but as in many other markets, the lack of suitable national infrastructure remains a key challenge.

Abdul Latif Jameel is committed to maximizing the development and opportunities of a new generation of hybrid and electric vehicles.  In doing so, we aim to help drive economic progress and prosperity across Saudi Arabia, the wider MENAT region and beyond.

Through our unique ‘guest-first philosophy’, world-leading automotive showrooms and long-standing relationships with Toyota and Lexus, we look forward to delivering new options to the transportation sector and helping every citizen enjoy improved living standards for many years to come.

[15] Middle East among the pioneers of electric car adoption, The National, 5 November 2018

Where next for mobility?

With more people on the planet than ever before, it is no surprise that the demand for mobility has increased – and will continue to do so as global population levels and living standards continue t ...

Despite a period of relative turbulence in the GCC automotive market over the past two years, which saw new car sales decline across the board, one segment of the market showed promising signs of grow ...