Few countries face water and sanitation problems as intense as Kenya.  Its problems stretch beyond simple water scarcity, with urbanization and poor sanitation compounding its difficulties.  Indeed, 41% of Kenyans still rely on unimproved water sources, such as ponds, shallow wells and rivers and only 9 out of 55 public water service providers in Kenya provide continuous water supply[1].

Africa-focused water charity, The Water Project, states that “Kenya’s natural water resources do not provide an equitable delivery of water to the various regions of the country and the country’s water basins do not reach an equitable area of the country[2]”.

Rapid urbanization is identified as a key reason many Kenyans face water and sanitation problems.  According to Water and Sanitation for the Urban Poor (WSUP), another leading water charity, a rapidly growing urban population has led to overcrowded informal settlements where residents have little access to water and sanitation services[3].

Residents of Nairobi, for example, have faced water rationing for many years, while a dry spell early in 2018 created an acute water shortage in several Kenyan cities, including Nairobi, Mombasa, Kakamega, Kericho, and Migori[4].  At the time, residents of Mombasa who were struggling against an acute water shortage were reported to be buying 20 liters of water at an average of 0.30 US dollars[5].

With 19 million Kenyans lacking access to safe water[6], and a large population of women and children spending up to one-third of their day fetching water in the hot sun from the nearest fresh water source[7], the need to find effective solutions has never been more pressing.

Organizations like the Abdul Latif Jameel World Water and Food Security Lab (J-WAFS) at the Massachusetts Institute of Technology (MIT) are working hard to overcome challenges such as these.

J-WAFS has already made a series of significant steps and continues to fund projects that could have a large-scale impact on water scarcity and pollution issues around the world.  It provided two years of funding support to researchers looking to develop low-cost water filters using sapwood xylem, for example, potentially bringing safe and affordable drinking water to the world’s lowest-income groups.  It also funded research attempting to address issues around the scalability and cost of water desalination.

Cutting edge research of the kind undertaken at J-WAFS is a key part of the longer term solution.  But in the shorter term, the challenges around water scarcity remain a day-to-day fact of life for billions of people in developing countries around the world.

“The key element of human life is water,” says Carlos Cosín, CEO of Almar Water Solutions, part of Abdul Latif Jameel Energy.  “Without water there is no sustainability. There are many billions of people that don’t have access to a reliable source of potable water.  Because we often look at sustainability from the standpoint of developed countries, water is often not perceived as a big issue.  But from the standpoint of developing countries, water is much more important than power.”

The first steps to water success

It is this acknowledgement of water’s critical role in global development that led Abdul Latif Jameel Energy to form Almar Water Solutions 18 months ago.  It is a decision that is already paying dividends, after it was recently awarded the contract to develop Kenya’s first large-scale desalination plant.

The development will have a capacity of 100,000m3 per day and supply water to Kenya’s second largest city, Mombasa.

Mombasa has an urban population of just over one million, almost a quarter of these live in informal settlements[8], and roughly 66% of its low-income population has no access to safe and affordable water[9].

Carlos says: “It’s not only a question of whether there is water available locally or not, but also whether the little water that might be available is potable.  Can people use it?

“The situation then becomes even more complex, because the lack of water is the source of many of the migratory movements in Africa.  If water is not available, then people tend to move to where water is available.  They relocate.  If water was to be available, then there would be less migration of people from one place to another looking for water.”

He adds: “This project in Mombasa is a very important step.  Mombasa is a city port that doesn’t have desalination.  Today, it is buying water from neighboring counties.  It depends on those counties, and whether those counties have enough excess water to send to Mombasa.

“There are periods of days when there are water blackouts, of non-supply of water, and this obviously has a huge effect on the population.  This new plant, built by Almar Water Solutions, will not only address Mombasa’s water needs, but also reduce its reliance on water coming from third parties.”

By combining skills and knowledge in both water solutions and renewable energies such as solar and wind power from their sister company FRV, Almar Water Solutions is in an enviable situation, with a clear and distinctive proposition.  “We’re starting to see an expectation in the market that companies need to provide a joined-up service including wind, solar and water, and there are very few companies that have the expertise in both industries,” he says.

To achieve its ambitions, Almar Water Solutions is monitoring several key markets around the world.  Alongside its project in Kenya, it is also active in South Africa, Chile, Peru, and Cyprus.  It is looking at the most effective way to enter the Egyptian market, where desalination is increasingly being used to complement water supplied by the River Nile, and continues to focus on Saudi Arabia – the home market of Abdul Latif Jameel Energy and the largest desalination market in the Middle East.

However, Carlos insists: “We’re not just looking at desalination.”  He adds: “The treatment of waste water, to bring it back to world standards, is usually a cheaper process than desalinating water from the ocean, which brings down costs for agricultural or industrial uses.

Almar Water Solutions is also able to develop innovative solutions that combine its expertise and capabilities across different sectors.

“We believe the future is solar desalination. Our teams are working together to take this a step further. Eventually, as battery storage facilities continue to come down in price, we’ll be able to have a 24-hour supply of electricity from renewable energy.”

For now, though, there are more immediate concerns.  “We need to structure the financing of the Mombasa project, which is going very well.  We’ve had good discussions and we’re making real progress.  We’re already starting the evaluation of the site, and we’ll start construction in the first half of 2019.

“People will be watching very closely the execution of the Mombasa project, and how the delivery of the plant goes.  Mombasa is also actively improving its water distribution network, which will mitigate some of the issues it’s been having – if you lose a major portion of water in a faulty pipeline that can become an issue in itself.

This is a major infrastructure development that will improve the lives of everyone in the city, a testament to the Government of Mombasa for their vision and concern for their population.  As they say, it is not the cost of water, but the cost of not having water” 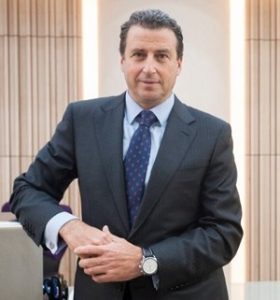 From bringing safe drinking water to more than a million people in Mombasa, through to pushing forward one of the most innovative energy companies in the world, Carlos Cosín has much to contemplate.  But he remains upbeat for the future – both of Almar Water Solutions, and the populations it serves in Africa, the Middle East, and the rest of the world.

He says: “Almar Water Solutions has allowed Abdul Latif Jameel Energy to become a leader in the key sector that’s driving sustainability.  The organization also funds the Abdul Latif Jameel Water and Food Security Lab (J-WAFS) at the Massachusetts Institute of Technology, so water is something that’s already front-of-mind in our organization. It’s the key element for both sustainability and population growth, especially in the Middle East.” It is no exaggeration to say that the future of our society, of our way of life, possibly even of our planet itself, depends on our ability to halt and potentially reverse the impacts of climate chang ...